December is going to be our 33⅓ Years of The Ex Anniversary Festival madness. Three festivals in London, Paris and Amsterdam, plus concerts in Brussels and Utrecht.

“Y'Anbessaw Tezeta” by Getatchew Mekuria + The Ex + Friends will be released on Terp Records on 9 July. 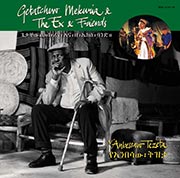 Quite unexpectedly, last year, while here in Europe for several summer festivals, Getatchew Mekuria at the age of 76, expressed an urge to make one more recording. With The Ex. Probably the last one in his life. A great responsibility!

We recorded in December, in Wormerveer and Addis Abeba. The result is stunning. Deep, old, classic melodies. Very different from the last one. Instrumental, more sensitive and fragile, deeper. Amazing horn riffs and solos, but also danceable, with up-tempo war-chants. Many things. He called it “Y'Anbessa Tezeta” (In Memory Of The Lion). Memories of 65 years of playing music! But also always new and forward.