2010 was a great year! In fact it was an insane year. We broke a new record playing 86 concerts. In total we broke through the 1500 gigs barrier. And a new CD Catch My Shoe, the first with Arnold, recorded by Steve Albini in Chicago. Very well received and selling in Europe and (from January 25th 2011) in America, on Ex Records. And most important of all, the music seems stronger, more original, more diverse and richer than ever (we think).

As well as playing more concerts than ever we also found ourselves in more diverse festivals than before. Seven major world music festivals, seven major rock festivals and seven jazz festivals! We played in Beirut, Lebanon in an avant-garde music festival; in Lille for children between 6 and 10 years and we ended the year at the Bimhuis in Amsterdam with a fantastic Dutch-Ethiopian New Year celebration. 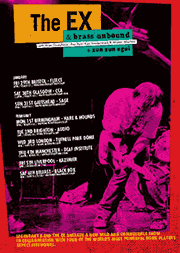 We started the year with a 10 date tour in the UK set up by Qu Junktions, our first encounter with a decent UK booking agency. The Ex and Brass Unbound. With a hand picked horn section with international jazz-toppers including Ken Vandermark (tenor sax), Mats Gustafsson (baritone sax), Wolter Wierbos (trombone) and Italian TV star Roy Paci (trumpet). In March we went to Chicago to record our new CD and played a concert with Shellac in the new Lincoln Hall and ended the trip at an adventurous rock festival in Knoxville, Tennessee. A week later we were in Beirut, Lebanon at the Irtijal festival, playing with drummer Tony Buck, and Berlin trumpeter Axel Dorner as well as with local Beirut players Mazen Kerbaj and Sharif Sehanoui. Later more dates in Poland, a large rock festival in Austria and a tour of the Balkans (Serbia and Croatia), ending at the great Cerkno Jazz Festival in Slovenia. In the summer Getatchew Mekuria and Melaku Belay again joined us from Ethiopia and we made two tours playing at various world music festivals and rock venues culminating in August in St. Nazaire, where 10,000 people attended the festival Les Escales. This was by far the loudest audience we'd ever experienced by the end of our set.

Meanwhile, in July we were on tour with the Ililta Band, also from Ethiopia, with the "rock star" Azmari singer Chalachew Ashenafi. We played at the Nickelsdorf Konfrontationen Festival and also at the wild wedding of Mats Gustafsson and ended in Ljubljana where Ililta Band played one of their best concerts ever. This was followed the longest single drive in our history. From Ljubilana to Nickelsdorf to Amsterdam and it took us about 21 hours... non stop.

In September, wonderful festivals in Palau in Sardinia and Incubate in Tilburg, where we were invited to curate an evening. Ab Baars solo made an unforgettable impression. "AbBaarsFreeJazz" for a young rock audience. And it worked! After many performances in the Netherlands and in England where we teamed up with Jackdaw With Crowbar, a great band from Leamington Spa who we hadn't played with for about 17 years and who were as strong as ever, we ended up in France, with a tour of 14 concerts in 13 days. Supported by a.o. Xavier Charles (clarinet) and sound poet Anne-James Chaton. A lot more public than ever. Many girls in the front row, mostly staring at a wild drumming Katherina.

In December more concerts in the Netherlands; Effenaar, Tivoli, Paradiso and more. With great support acts such as Afework Negussie, an Ethiopian masinqo player from Rotterdam, or break-core-poetry duo Raaskalbomfukkerz. In between we went to England for a performance at the ATP festival, curated by Godspeed You Black Emperor. Six hours stuck at Schiphol. Then on the main stage. Nothing to lose. Full house. Incredible gig. 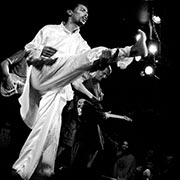 The last three days of the year we played in Groningen, Utrecht and Amsterdam with the "Fendika" band from Addis Ababa. This group are all performers from Melaku's Azmari-bet in Addis (live traditional music bar) and they were joined by jazz musicians such as Ab Baars, Wolter Wierbos, Joost Buis, Xavier Charles and Han Bennink. Ending with a big dance party in the Bimhuis with DJ's Andy and Terrie literally shaking the whole building up and down.

The microwave is on its way out! Great was the all-night fried squid with garlic in Cerkno, the all-night "cook in the basement" in Krakatoa, Bordeaux and the surprisingly brilliant Indian take-away in Bristol. And on the UK tour Roy Paci had a whole list of Italian chefs in Britain. Before we knew it we were in the "Locanda" in Gisburn (between Liverpool and Manchester) eating the most incredible Italian specialties. The chef specially opened up for Roy! Once, long ago, in England we were given a tin containing chips, a fried egg and white beans for breakfast . By far the worst food this year was at the Nancy Jazz Pulsations Festival. Wow! The food was rancid fat fries with old stew. That was it. For vegetarians, it was rancid fat fries without the stew!

Was not that bad. This year we have not fallen through the stage. A black eye (Paradiso) and a bleeding ear of Hans Falb the boss of the Nickelsdorf festival. Some too crazy dancing and a little too wild guitar. And this year we didn't have to remove French light-people, drunken Polish punks or blunt security. The most ridiculous security situation was in Nancy Jazz Pulsations Festival. A stage 40 cm high , a room for 300 people and a-security-barricade-fence twice as high as the stage.. Some organizers have apparently still have not realized that this usually cause more aggression and problems than they solve. And these new rock temples are a marvel. Lifts, Mars-bars and fire doors. A dressing room still works best behind the stage not four storeys up and only accessible by lift and through 37 locked doors. Makes it a bit hard for the band to sense the vibe in the room.

Is already fully booked! At least till October. In February (19-29) we go to Ethiopia for our next music project. In March a major tour in the U.S., playing with DJ Rupture, Liturgy, Death Sentence Panda, and in Chicago, Follows, Ken Vandermark and the amazing Ethiopian beganna player Zerfu , then Germany and the Netherlands. In April, May, Russia and with The Ex and Brass Unbound in Canada plus a number of festivals in Switzerland. In June at various summer festivals with Getatchew Mekuria. On July 1 and 2 we've been invited to curate an entire day at the Roskilde Festival and a rock festival in Warsaw. After the summer we will tour with Ex + Brass Unbound and in the autumn tour in Greece, Spain and Poland. Hopefully at the end of the year we will take a break and take some time to write some new songs for 2012.